The 1st Airborne Division under the command of general Urquhart had received the most difficult task. They had to capture the bridge at Arnhem and to hold it until the second army would arrive.

The division had seen action in Sicily and Italy before it jumped into Holland.

The British general wanted to land on top of the bridge. In the night before the invasion in Normandy, the British 6th Airborne division had taken the bridge across the Orne in a glider assault. The garrison was taken completely by surprise when the gliders landed only a few meters from the bridge. The fields south of the bridge seemed ideal but intelligence convinced the planners that the land was to soft to land with gliders. Landing with paratroopers was not an option because the city began directly on the other side of the river. The paratroopers that where dropped to late would land either in the Rhine or else on top of the roofs in Arnhem which would lead to heavy casualties during the drop.

Another aspect that had to be considered was Airfield Deelden. This was located Northeast of Arnhem and it was protected with heavy anti aircraft guns. If the aircrafts where going to drop close to the bridge they would not be able to avoid the flak from Deelden right after they had dropped their cargo. The planners where afraid they would loose to many planes in the early stages of the operation. Since the allies already had a shortage of planes, the loss of many more would be disastrous according to the planners.

On the map you can see that the drop zones and landing zones
for the gliders where miles away from the target.

The shortage of planes forced the 1st Airborne to spread the arrival of its forces over a three-day period.

The main force would arrive on d-day. The 2nd Battalion under the command of General Frost would go on foot to the bridge and hold the bridge at both ends. The other forces would be spread out because they had to hold the drop zones while they waited for the reinforcements to drop in the next two days. For the dropping of supplies it was also crucial that the drop zones where kept in British hands. The 4th Brigade under command of General Hackett would arrive on d-day+1 and after arrival would take hold of the high ground north of Arnhem. 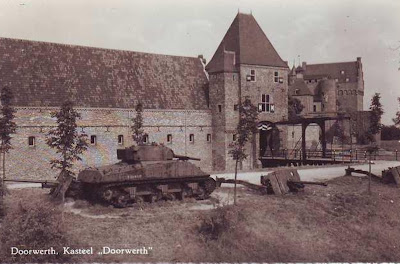 The British landed not only with paratroopers in the first assault. They landed simultaneously with gliders. The drop zones where several miles from the bridge and therefore a number of jeeps would arrive with the gliders so that a task force with machine-gun mounted jeeps could race towards the bridge and prevent the Germans from blowing up the bridge before the 2nd Battalion of General Frost would arrive on foot

Short history of the battle at Arnhem

Veterans tell about the landings on September 17