The 82nd (All American) Airborne division had returned to England after 72 days in combat in France which had started with their drop in Normandy in the night before D-day.

Before Normandy, the division had seen action in the landing on Sicily and in Italy. The division had landed in Italy on the request of General Clark when the forces that had landed from the sea where almost pushed back by German counterattacks. The 504th had landed in Anzio with the 3rd and 35th Infantry divisions in an attempt to draw the Germans away from their defense line at Monte Cassino and force a breakthrough in the stalemate there. The Allies caught hell at Anzio but where not driven back in the sea. The 504th returned to the division after it had returned to England.

The 82nd was the connecting force between the 101st at Eindhoven and the British 1st Airborne north of the Rhine at Arnhem. The division had to capture and secure bridges across the Waal and The Wilhelmina Channel. John Dolan was one of the three officers that was with General Gavin, the commander of the 82nd when he learned about the whole operation on the tenth of September.

We discussed the operation and we both felt right then that the British would probably get hell at Arnhem. They were dropping very far away from the bridge and that seemed very unwise.

For us the dropping forty miles behind the line would definitely be our greatest test. General Gavin wanted to drop almost on top of the Grave bridge and the Nijmegen bridge. He learned that he couldn't drop on the Nijmegen bridge, the only possibility was to drop on the high ground at Berg-and-Dal and then to move up to the Nijmegen bridge. That was quite a risk that General Gavin had to take there. Intelligence had told us that there were hundreds of German tanks in the Reichswalt Forest, which starts not far to the east of Berg-en-Dal. We didn't knew anything about the German strength at Arnhem or their strength at Grave. Spreading the division over a large area(25 miles) as general Gavin was forced to do mend an awfully great risk.

The 504th was dropped at the bridge near Grave (Zone O), the 505th at Berg-en-Dal (Zone N) and the 508th just north of the 505th (Zone T). If the tanks that were said to be in the Reichswalt would reach our positions before the gliders arrived, they could easily overrun our positions.

The word about the operation was passed down to the other soldiers on the twelfth or thirteenth. When we were on our way to the airport everybody knew where we were going and what we were doing. 85 percent of the men were seasoned combat troops at that time, having fought in Sicily, Italy or Normandy. Some did all three.

Veterans tell about the landings on September 17 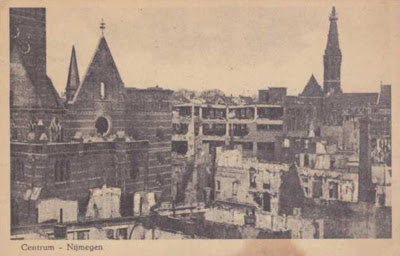 Nijmegen after a bombardment. 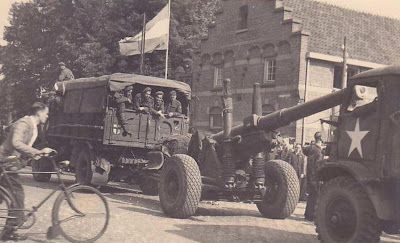 Books about the 82nd Airborne Division in WWII