The first hint that we were going to drop in Holland was when we suddenly were ordered to attend a speech by General Eisenhower. He told us that it wouldn't be long before we were involved in an important mission. He didn't say where we were going then, but we had a good idea that it was probably an invasion of some sort across the Rhine. (this was approximately two weeks before the start of Market Garden) 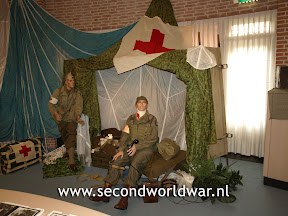 Up to that point our duties had consisted mainly of supplying gasoline and oil to forward positions in Belgium and transporting back to England, ex-prisoners of war who were being liberated as we advanced toward Germany. In between these missions, we practiced dropping paratroopers and towing Gliders. We had our base at Spanhoe in England, this was a town, located between Leichester, Nottingham and Peterborough.

On the 17th or mission was to drop the US 82nd Airborne Division near the town of Grave in Holland. The german fighter planes couldn't get near us because of the protection that was provided to us by our fighter aircraft. Before we arrived ant the IP (initial point-before heading to the DZ) most of the shooting at us had been directed toward the gliders that were being towed at a higher altitude than we were. Over the drop zone the flak was thick and it seemed impossible to fly through the smoke from the 88th shells exploding all around. Once over the drop zone we were to busy flying and giving signals for the drop to commence that we didn't think about the flak or anything else.

US paratroopers getting ready for Market Garden. Photo: Clifford Kranz 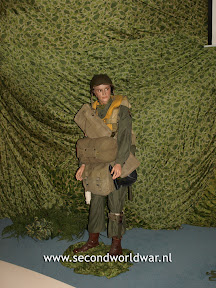 During the drop we had flown at a slow speed of about 105 mph and an altitude of about 325 feet. As soon as everything was released we "hit the deck". We dove the plane just above treetop level and accelerated as fast as we could. We had been flying formation up to that point. From there we went completely our own way. Some climbed as fast as they could while others dived like us. On our way back I could plainly see the Dutch civilians waving at us from the ground. Some seemed to be crying.

I remember flying back to England with a terrific headache from the tension, and the sun was in our eyes most of the way, making it unpleasant. When we had returned to our homebase in England we realized that we had several holes in the wing from 20 mm tracer shells. We had flown so low that these shells had to have come from people shooting at us from the flak towers. The shells had gone through the plane in a downward angle. We had seen the tracers on our way, but thought that we had escaped unhit. We were debriefed and given a shot or two of whiskey. I sure could use one this time.

On 12.31 pathfinders land on the drop zone at Grave. 34 minutes later the main force arrives. The 504th Regiment and Company C of the 307th Parachute Engineers land on the drop zone. At the same time E Co of the 504th was dropped south of the Maas river and the rest of the 2nd Bn moved toward the bridge from the North side. There where firefights in the vincity of the bridge for several hours before the 504th had secured the bridge.